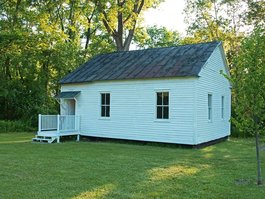 The Schoolhouse,  along with the Luykas Van Alen House (same property) is currently self-guided.

The Ichabod Crane Schoolhouse is a 19th-century building that served as a local single-room public school into the 1940s. In 2017, awarded a ‘Legends & Lore’ marker by the New York Folklore Society & William G. Pomeroy Foundation honoring Washington Irving’s “Sleepy Hollow” character ‘Ichabod Crane’, who was patterned after the original Kinderhook Schoolteacher — hence the schoolhouse name. The schoolhouse was originally located at the corner of 9H and Fischer Rd; it was moved to the Luykas Van Alen house property in 1974 after the Kinderhook school district centralized, and restored to its 1930s appearance.

Admissions for the Van Alen House and Ichabod Crane are combined