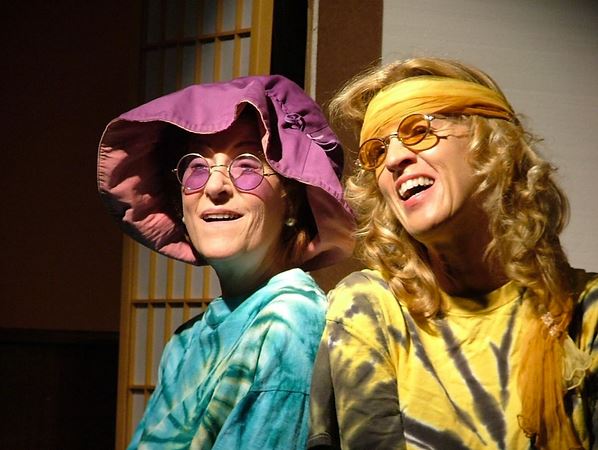 Lisa Carman and Alaina Warren Zachary were part of the vibrant Columbia County creative community for many years until they both moved to Santa Fe, New Mexico in early 2000’s. Lisa currently resides in Montana and Alaina lives in Alburquerque.

Lisa performed original songs and created the very popular Calamity Kids. She was a singing duo with Sally McCarthy. Alaina owned Pavanne Emporium on Main Street and performed at the Ghent Playhouse where she and Lisa met in a production of Gypsy in the 80’s. A life changing event for both.

Together they wrote Aged to Perfection, a funny musical revue and AIDS benefit, which sold out and had to be extended at the Ghent Playhouse.

The duo are both multi-award winners: Lisa garnered 13 New Mexico Music Awards for her original songs and record producing and Alaina for her screenplay These Broken Wings and her sitcom pilot Crankey Village, NM. They both have been performing professionals for more than 50 years.

Lisa’s original music encompasses Americana/Roots Music and she continues to educate young folks online and at She Sings Studio. Lisa teaches songwriting courses online across the country. She has written, recorded and released many, many CD’s of her original music. She now works with spoken word healers to create New Thought Meditation pieces.

Alaina had a Broadway career before moving to Columbia County. Since relocating to New Mexico, film and TV guest appearances include Better Call Saul, Roswell, Wander, and Half Brothers. She taught musical theatre at the Santa Fe University of Art and Design and performed on stages in Santa Fe and Albuquerue. Alaina currently is a comedy writer and her sketches appear in the LA-based live weekly show This Week This Week.

This show will again include surprise guests, audience participation, give-aways, and major comic mayhem, all to benefit the Ghent Playhouse.