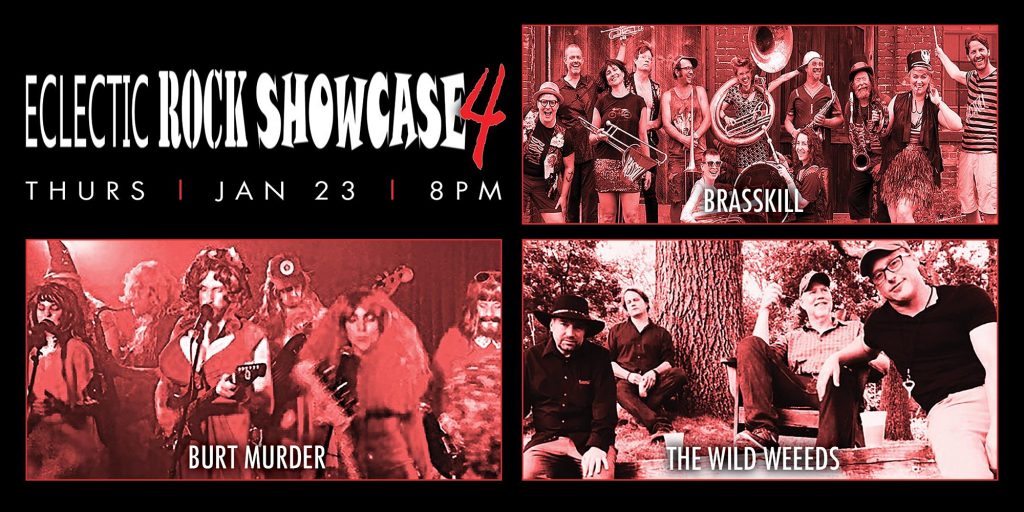 Brasskill is the Hudson Valley’s new party brass band. Based in Hudson, NY and founded in the Spring of 2018, Brasskill’s membership covers a wide geographic area — from Rosendale in the south, all the way up to Chatham in the north. Bringing funky decibels to parties, parades and other merry gatherings in the Hudson Valley and surrounding areas, Brasskill’s music ranges from New Orleans second line tunes to punk and pop covers and is guaranteed to get your party out on the dance floor.

Wild Weeeds are the manifestation of mutant rock ‘n’ roll that grew out of the ponds, lakes and streams of Columbia County, NY. Wild Weeeds play “Garage Rock” like the Seeds and the early Stones but mix in New Wave, Copake surf music and their own unique potent energy. They’ve completed a full-length album called “Let It Bleeed” and two EPs “Sunset Rock” and recently “Grass Planet Holiday”.

Completing this hell of a show…is Hudson Valley’s own oddball-drag-rock-collective BURT MURDER . Like the Rolling Stones at Altamont, BURT MURDER owns the genre “Disaster Rock” with deadly regional hits such as; Non Stop Party Machine, I Want to Kill You, Ripped My D*ck Off, Fill Me with Honey, DO The Cucumber, and Boo It’s Halloween! If you love Beck or Ween…do not miss this massively talented band that also has gender wardrobe issues.