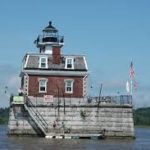 Working with our partners at the Hudson Athens Lighthouse Preservation Society we are pleased to offer in depth lighthouse tours.

Tours will leave from the Hudson City dock behind the Gazebo at the Henry Hudson Riverfront Park.

Our longer tour times will allow for visitors to have enough time to tour the lighthouse, watch the video on Hudson River history narrated by Emily Brunner, who lived on the lighthouse as a child and participated in tours until her early 90’s. There will also be an opportunity to see a video of the early founders of HALPS and the initial restoration of the lighthouse. Videos run on a continual loop and can be joined at any time.